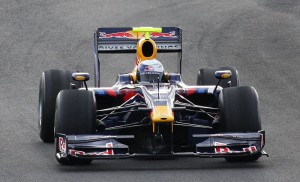 Red Bull served notice that it is the team to beat this Formula 1 season as Sebastian Vettel and Mark Webber claimed the top two spots in Sunday’s Malaysian Grand Prix. Vettel went from first to third in the first corner of the race at the Sepang International Circuit and had little trouble the rest of the way. The only question was if Vettel’s Red Bull car, which had betrayed him the first two races of the season, could last the entire race.

Webber started from the pole, only to see his teammate get underneath him coming out of the first corner. Webber’s attempts to mount a comeback were damaged during a pit stop, when a faulty air gun caused the team to spend a valuable extra second in the pits.

McLaren drivers Lewis Hamilton and Jensen Button were forced to start near the back of the field after missing their set-up during a rainy qualifying session. However, both drivers made the most of dry rain conditions during the race, with Hamilton finishing sixth after starting 20th while defending series champion Button moved up from 17th to eighth.

With the win, Vettel moved up to third in the series standings, behind Felipe Massa and Fernando Alonso.