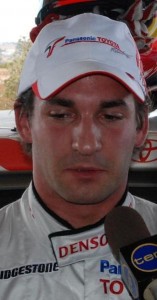 BBC Sport is reporting that German driver Timo Glock has been signed by new Formula 1 team Manor Grand Prix team as their lead driver for the 2010 season. Glock had driven for Toyota for the past two seasons, finishing tenth in championship points each season with career-best finishes of second in Hungary in 2008 and Singapore in 2009.

Manor Grand Prix technical director Nick Wirth said that getting a driver with the pedigree and experience of Glock is a significant step forward for the team, which is expected to be named Virgin F1 before the start of the 2010 season.

“It has always been my recommendation that we have at least one driver with experience of the 2009 cars to help our development programme,” he said.

“But to get a driver that has not only achieved podium finishes in 2009 but has such proven talent and the potential to take us forward for many years is very exciting.

“The fact that he has come and seen all aspects of the project before making his decision speaks volumes about what we have achieved so far.

“We just can’t wait to get Timo into the new car once track testing begins next year.”