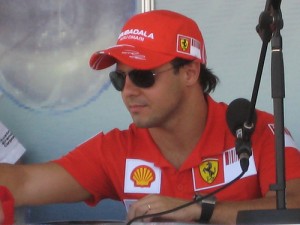 Ferrari driver Felipe Massa is on the road to recovery following a near-fatal accident during qualifying for the Hungarian Grand Prix in late July when a piece of debris from another car struck him in the head and punctured his visor. CNN.com reports that the Brazilian driver is scheduled to wave the checkered flag to signify the conclusion of the Brazilian Grand Prix on October 18.

Massa will become the third celebrity to wave the checkered flag at the end of the race at Interlagos. Soccer star Pele and model Gisele Bundchen have also performed the duties.