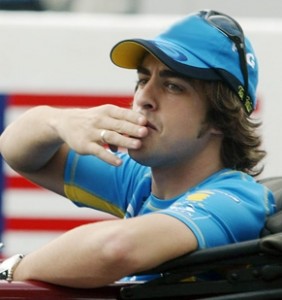 Fernando Alonso was fastest during both practice sessions on Friday ahead of this weekend’s Belgian Grand Prix, and the Spanish driver is hopeful that the recent gains made by the Ferrari team will carry over to what appears to be a wet weekend at the Spa circuit.

Alonso turned a fastest lap of 1 minute, 49.032 seconds in a driving rain during the afternoon practice. That was 11 seconds faster than the leading pace he set in the morning session, placing him just ahead of Force India driver Adrian Sutil and McLaren’s Lewis Hamilton. Current points leader Mark Webber’s best practice time was 18th overall, while Red Bull teammate Sebastian Vettel was sixth.

However, things could change rapidly this weekend thanks to the weather. Teams are limited to three sets of extreme wet weather tires, and with heavy rains expected during Saturday’s qualifying and perhaps during Sunday’s race, teams are having to take calculated risks in terms of their tire strategies.

“With these changing conditions you need to gamble a little bit in qualifying because you can gain two or three-tenths in one lap,” the two-time champion from Spain said. “Having five drivers in the title fight in these conditions, you can quickly lose a lot of places.”